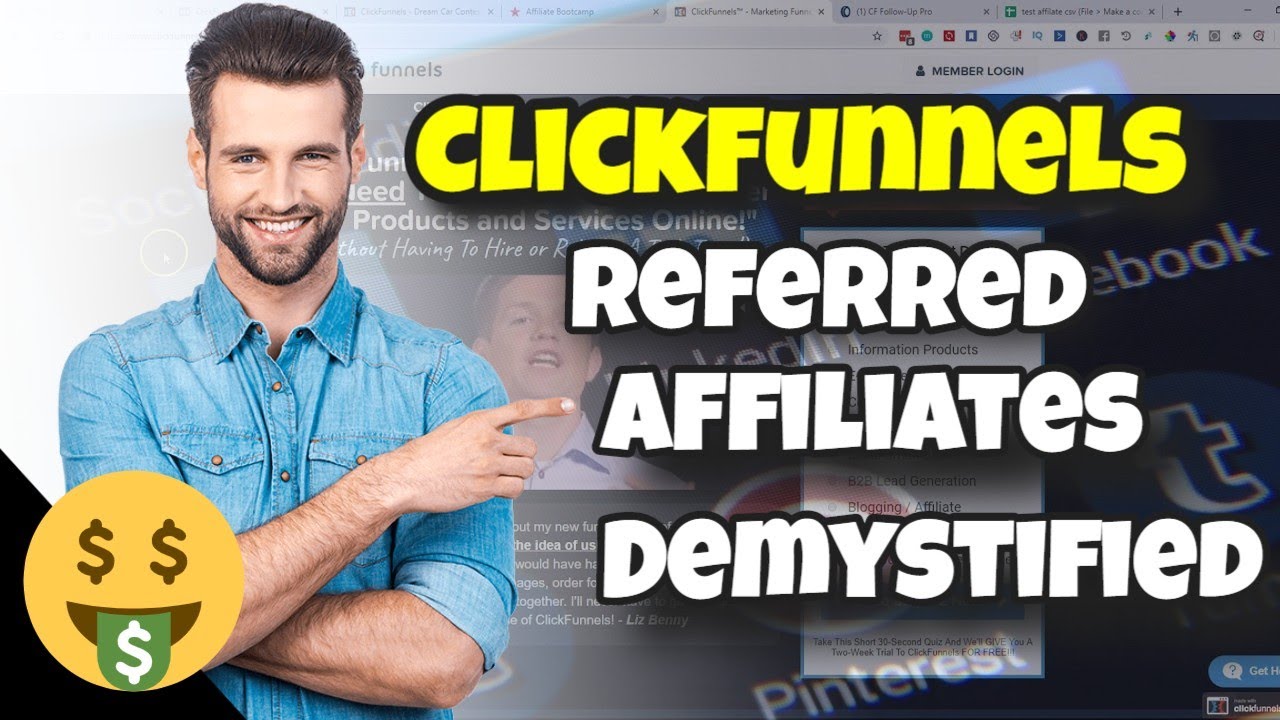 Okay what is going on in your buddy this is James first thanks for tuning in today so today there’s a lot of questions about refer to Philly it’s what those are where they come from how to treat them and is actually four different ways that I know of that someone can become your referred affiliate and each of the different ways you would want to treat a little bit differently and so it’s good to good to know really the ins-and-outs of the referred Affiliates and the first way is that they signed up under you.

As one of the dream car.

People okay so if you sign up someone to be an affiliate get started with clickfunnels affiliate program now.

Okay if I was to send you to my.

For what you dream card.com and you became an affiliate under me.

Then that means that your email would show up over here.

And means I would get 5% of everything that that person made as an affiliate of all I would be there would be my tier 2.

I feel like I so they would be signed up as an affiliate under me with or without a clickfunnels account okay.

Be a referral affiliate for.

Play number two very similar is if they signed up under you with the affiliate bootcamp.

So you come here you would come in with my affiliate bootcamp playing and you would sign up to become an affiliate.

That would be the same thing you would also be under me as an affiliate I would get 5% off of everything that you made okay.

Is if I actually did sign you up for clickfunnels.

Gamesir you’re now under me officially under me I signed you up and then I’m I’m going to automatically get 5% of anything that you do as well.

As referred affiliate okay so I sent you for clickfunnels you start getting other people under you I’m going to get 5% of that that’s a refer to Philly.

I’m in the fourth way.

Is if you come to my clickfunnels affiliate link.

And you start to fill out the free trial.

Can you put your email address in.

Maybe and maybe that’s as far as you get.

Can you see that you have to enter a credit card whatever it maybe you see how much the monthly bill is whatever it is.

That poor that email just from getting started right here without even putting in a credit card is going to have them show up over here is as a refer to fill.

Okay so you can see us four different ways.

And depending on how they came in.

You would want to treat them different.

Okay so if someone is trialling under you.

You know they’re going to come in as a refer to Philly it but you also them then later see the you’ll see them trialling.

In the commission’s report KLC.

Understanding all these different combinations of how they might end up as referred affiliate that’s what CFO Lowepro does it knows.

It doesn’t know exactly if they came in on a dream car link or affiliate bootcamp length but it does know if someone came in on as a refer to Philly it but they’re not trialing okay cuz the trialling the trailer automation automatically exit them out of the referred Affiliates Automation and so they refer to Philly it’s these all these emails going to end up over here in sheet 2.

Those are going to automatically get sent in to see a follow-up row.

I need to go through the referred Affiliates automation is going to try to determine what these people how these people came in on under your referred affiliate section okay and so at the moment at least the worst case scenario you’ve got some email addresses right that are interested in clickfunnels in one way or another either from an affiliate side or trial in clickfunnels and so you’re going to want a warm them up with a referred Affiliates automation.

And and you can also have them join your Facebook group you can also present them other affiliate offers and so if you’re not following up with these refer to Philly it’s in determining where they came from and what they’re interested in then you’re pretty much leaving money on the table and so those are the four ways.

That someone can become your refer to Philly it’s not that it’s not that best fits off the hottest traffic because obviously someone that’s trialing is way hotter.

Someone that is purchase funnel hacks or funnel Builder Secrets these are a much hotter leads but these are still warm traffic that’s interested in clickfunnels to some extent has an affiliate work they got a little bit of cold feet about to do their trial.

Or they could be traveling under you as well.

And so each one of these you kind of have to look at individually.

And see who they are what’s their interest and then follow up with them accordingly and that’s what CFR Lowepro does for you automatically mean you can check out see a full of pro at CF follow Pro..